If you are considering selling Younique products, our comprehensive Younique review will help you to decide if this opportunity is right for you. The insight that you gain can help you to determine if this company is legitimate or if there is a Younique scam that you should avoid. 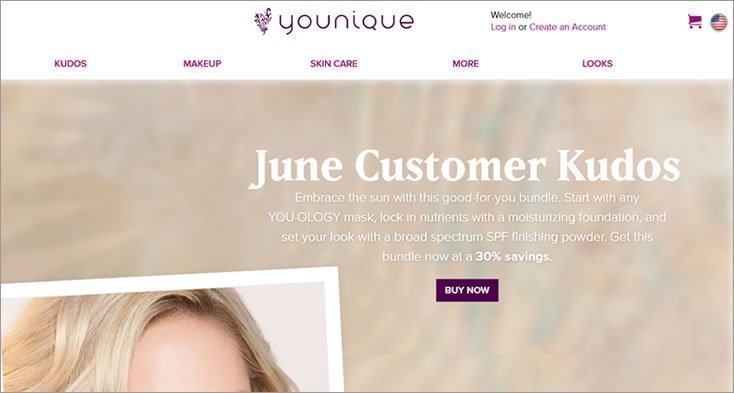 Younique is a company that sells beauty products. It is a multilevel marketing company that states that their mission is to empower, validate and uplift women throughout the world.

To sell the products, you become a presenter. This also allows you recruit new presenters to sell under you so that you can earn from their efforts.

This company began in 2012. Melanie Huscroft and Derek Maxfield, two siblings, own the company. They state that family is the foundation of this company.

Derek Maxfield says that when his friend was dying, he promised that he would do something good and this is what sparked the idea for this foundation. The foundation launched in 2014. Its purpose is to help people who are survivors of childhood sexual abuse.

The reviews about the products are mixed. Some people swear by them while others feel that they lack quality. There are multiple makeup products, including foundation, mascara, eyeshadow, lip products and brushes and other tools. They also have skincare products, such as face primers and masks.

Their most popular product is the Moodstruck 3D mascara. The good and bad reviews for this product are about 50/50. Some people say that they notice a dramatic difference in their lashes when they use it. Other people say that many other brands are better.

There is some controversy over the mascara due to the fibers that it contains. Some people say that they have experienced eye irritation due to these fibers.

How Does Younique Work?

Younique works by selling products via direct sales and recruiting new presenters. To sell the products, you have to first become a presenter. You can go on their website and find a sponsor in your area to sign up under.

Once you sign up, the company gives you a presenter’s kit with different products that you can use to show potential companies the products. The website says that they also give you business tools, but they do not state exactly what these tools are.

How Much Does Younique Cost?

To purchase the presenter kit that you need to become a presenter, the cost is $199. They sometimes have specials that allow you to purchase this kit for $99. To remain active as a presenter, every three months, you have to sell at least $125 worth of product.

How Much Do People Make Selling Younique?

Can money be made with Younique? This information will show you whether it is a viable opportunity.

Once you get to exemplary status, you also start earning commission from the people that you recruit. This ranges from three to six percent, depending on your presenter level.

This company does not put out an income disclosure statement every year. Because of this, there is no information on the average earnings for presenters. A few independent blogs have created some figures based on the company’s SEC filings. These show the following:

In 2016, the company said that they had nearly one million presenters throughout the world. Based on their earnings for that year, this suggests that the average earnings for presenters was $87.39 for the entire year.

What Other People Are Saying?

This part of our Younique review looks at what other people are saying. Getting the opinions of current and former Younique presenters can help you to determine if selling these products is a good choice for you. Here are reviews from the following websites:

The company has under three stars on Consumeraffairs.com at the time we compiled this Younique review. This is from 53 ratings. The ratings are a mixture of customers and people who are selling the products.

Those who are customers are mixed. One reviewer says that she has zero complaints. She believes that this line of products has helped to improve her skin.

Another reviewer says that the products are way overpriced for their level of quality. This person says that she gets similar results drugstore items that are considerably less expensive.

The presenter experiences are just as mixed as the customer reviews. Some of the presenters say that their experience has been good and that they feel supported by the company. However, others have had a negative experience.

One former presenter says that she feels that she was thrown to the wolves. The person who signed her up just took her money and offered no help to get her started as a presenter.

Out of 11 reviews, this company has four stars on SiteJabber at the time we wrote this Younique review. The reviews appear to be mostly from people who purchased the products.

Other reviewers are not happy with the products. One reviewer says that the eyeshadow palette she tried was not blendable. She also says that the colors lacked pigment, making the item mostly unusable.

One reviewer says that the foundation is okay but overall, most of the products that she tried are just not good. She says that within three weeks, the mascara she purchased was dried up.

This company is accredited by the Better Business Bureau. They became accredited in 2014. They have an A+ rating. Out of 33 customer reviews, they have three stars at the time of this writing.

There are 47 customer complaints listed on the Better Business Bureau website at the time we compiled this Younique review. The complaints break down into the following categories:

Several complaints say that they ordered products from a representative and never received them. Dealing with corporate was difficult. Most of these complaints appear to be unresolved.

One person says that they ordered the lash serum for his wife. He says that this product caused her eyes to be red and puffy the next morning.

There are several complaint reports on RipOffReport about this company. One states that the company does not appear to be concerned with customer satisfaction. This person says that they were denied the guarantee that says that if you do not love the presenter kit, you can return it for a refund.

The company has a Facebook page, but they do not have a review section. Several people have posted their experiences with the products and presenter opportunity.

There are numerous comments from current presenters trying to get people to sign up under them. These comments praise the company.

The comments from past presenters are largely negative. They mostly revolve around poor product quality and how difficult it is to sell the products to earn any money.

Younique has 152 reviews on Indeed.com which results in 4.1 stars at the time of this writing. This website appears to have a mixture of presenters and corporate employees.

The corporate employees appear mostly satisfied with the work environment and what the company has to offer their salaried workers. They give good ratings for things like management, job security and work-life balance.

The presenter reviews are mixed. Some of them say that they love the flexibility that being a presenter affords them. However, most reviewers state that they do not make enough money to replace even a part-time job.

They have 3.7 stars on Glassdoor from 135 reviews at the time we compiled this Younique review. Most of these reviews appear to be from current or past presenters.

All of the people who claim to be current presenters are praising the company. They state that they make lots of money and that the products are excellent. None have a single negative word to say about being a presenter.

The reviews from former presenters paint a different picture. One says that they could not sell the products. This person states that the negative view of the company and the high cost of the products caused them to stop being a presenter within two months of signing up.

Another reviewer says that the company is going downhill fast. She claims that she got no support from the person who signed her up. This person also says that few people were willing to even try the products.

The blog comments vary based on the content of the blog. The blogs that have a mostly positive outlook on the company tend to be largely positive. There are also numerous comments on these blogs where presenters are trying to actively recruit people to become a presenter under them.

The blogs that provide a negative or balanced look at the company are far more mixed. Some of the comments on these blogs are still positive. There are also several comments where recruitment attempts are present.

However, there are also several negative reviews. Many say that as a presenter, they simply did not earn any money. They sold one or two items and that was it.

There are multiple comments about how the negative view of the company makes it difficult to get any sales. Some of these comments referred to the sales tactics used by presenters as predatory.

The blog comments about using the products were also mixed, but there seems to be more negative experiences than positive ones. Most negative comments state that the products are considerably overpriced and that you can get better quality from drugstore makeup items.

Our verdict for Younique is recommend with caution. We are confident there is NO Younique scam. They do pay their presenters. However, the earnings are usually not enough to replace a part-time or full-time job.