Survey Junkie is a Website which collects data about the preferences and brand awareness of consumers by offering them the opportunity to complete paid surveys provided to them by other companies. Members are rewarded for their time answering questions by being awarded points. Each point is worth one cent, and points can be redeemed for a cash payout via PayPal or an e-gift card (e-gift cards are available to US members only). Membership is open to anyone aged 18 or older who resides in the USA, Canada, Australia and the UK. Members must accumulate a minimum of $1000 points (worth $10) in order to be able to cash in. However, you may accumulate more than that if you wish and save up for a bigger payout.

To start, a user need only to create an account by providing his or her email and creating a password. Once the account has been created, the user may opt to fill out a complete profile. There are actually seven different sections to a profile which are designed to help Survey Junkie get a better perspective on your own personal consumption habits. They include: general (your basic biographical info), technology, shopping, health, household, interests and travel. Each section is worth ten points, and your answers will help Survey Junkie determine which of its surveys are relevant to your lifestyle and offer you the opportunity to complete those surveys. 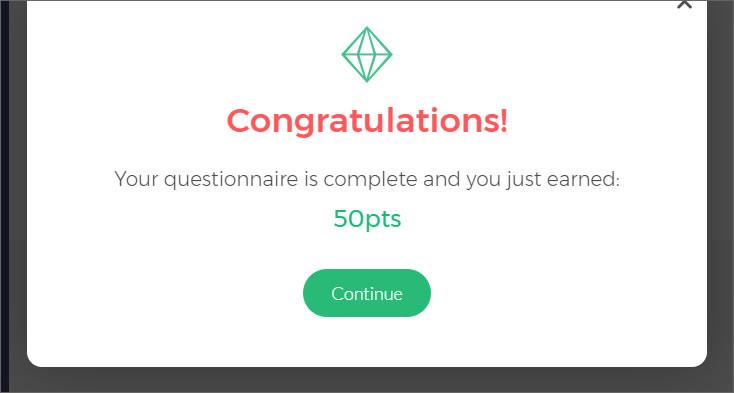 Where do these surveys come from?

SurveyJunkie.com acquires surveys from other companies that want to collect data about consumption habits and brand awareness from the public. The data gathered in these and other consumer surveys help the sponsoring companies decide on many different aspects of business, from what kind of new products or services to create/offer, to how familiar the average person is with their brand. Consumer opinion is very important to big companies, which is why they are willing to pay to get this information directly from the public.

How does Survey Junkie decide what surveys to send me?

The surveys that will be offered to you will be determined by the information that you provide in your profile and may also be based on information that you provide in other surveys. For example, one of the questions under the “health” profile category asks if you smoke cigarettes. If you answer “no,” Survey Junkie will not offer you surveys from cigarette companies because the information wouldn’t be relevant to their interests. If you indicate on your profile that you have young children, Survey Junkie may offer you surveys on toys and toy companies which they would not offer to Survey Junkie members who do not have young children. If you indicate that you have a dog, you may end up getting survey offers that have to do with pet ownership, dog food or dog grooming that a non-dog owner would not receive.

For this reason, it is in your best interest as a SurveyJunkie.com member to fill out all sections of your profile completely. It’s also important to stay fairly active in completing surveys, since the information you provide on them will generate more offers for you.

Survey Junkie also sends surveys to you based on the frequency of your activity on SurveyJunkie.com. For instance, someone who logs on and fills out surveys every day will get more offers than those who only log on occasionally. Those with a high level of activity on SurveyJunkie.com may also notice that they are receiving more higher-paying surveys than they did in the beginning. This is how Survey Junkie encourages and rewards members for filling out a lot of surveys.

How many points is one survey worth?

It depends, mainly, on how long the survey takes to fill out. Longer and more time-consuming surveys are worth more points. Shorter ones are worth less. For example, filling out each of the profile areas of interest are worth 10 points and take five minutes or less to answer. It’s not just length that determines the payout, though. Sometimes you’ll see two surveys that both say they’ll take 20 minutes to complete, but one may pay out more than the other. Usually, this simply means that the information in the higher-paying survey is more valuable to Survey Junkie at the moment.

You must fill out the survey in its entirety in order to qualify for points. You cannot save answers partway through a survey and then come back to it later. Fortunately, each survey is listed with the estimated time that it will take you to complete so that you don’t end up wasting your time.

You can also get points for other small tasks. For example, you get 50 points for completing your profile. You’re awarded 25 points just for confirming your email.

What do I get with my points?

Each point is worth one cent. You can cash in your points (you must first have a minimum of 1000 points) in two ways: you can ask to have cash deposited into your PayPal account, or you can trade your points in for a gift card for the equivalent dollar value. Currently, the available gift cards are from Amazon.com and Target. However, these offers could change at any time.

Naturally, as part of our Survey Junkie review process, we wanted to see what other Survey Junkie users are saying about their experiences. We checked with TrustPilot.com, a user-review site which allows members of the online public to post reviews of other online businesses and in this case, a Survey Junkie review. Reviewers must rate a business out of a five possible stars and provide a written explanation of their rating. Trust Pilot then averages all reviews and assigns a score out of ten.

Those who left a Survey Junkie review and who rated Survey Junkie at one star made comments like “consistently ran into surveys that have ‘expired,’” “got kicked out of surveys,” “spent time filling out a survey only to be told at the end that I didn’t qualify,” “surveys take too long,” and the like. Some people complained that they would have liked to take more surveys but weren’t able to because they didn’t qualify for many. Some reviewers also complained that, after joining Survey Junkie, they began receiving an excessive amount of spam emails. Overall, it seemed that there was an equal number of positive and negative user reviews of SurveyJunkie.com.

OUR VERDICT ON THIS BUSINESS OPPORTUNITY:

There are hundreds of “get paid to complete surveys” Websites out there. It seems like you can hardly surf the Internet or open your own email without seeing an ad for one. Survey-taking websites tend to have a negative reputation among consumers, and probably for good reason. Many make exaggerated claims about how much money you can earn “by simply filling out surveys.” Some are so fraught with red tape and conditions that it’s not worth your time in the end. Others lead you to believe that you can fill out any and every survey that comes along, only to tell you halfway through completing a particular survey (after you’ve already spent ten or fifteen minutes of your time) that you don’t qualify for that survey. Still others rip you off completely, never paying up after you meet the requirements. It’s maddening.

It’s too bad that all of the bad survey-taking opportunities out there are spoiling it for the good ones, like Survey Junkie. Honestly, when we began researching Survey Junkie, we truly believed we would find just another one of those misleading, time-wasting, low-paying or rip-off survey sites. What we discovered was a site with legitimate offers and straightforward surveys.

However, this, apparently, has not always been the case with SurveyJunkie.com. We found evidence that suggests that SurveyJunkie.com was passing itself off as a market research company in its early years, when it was actually nothing more than a portal directing users to other online survey sites. While it was free to join SurveyJunkie.com, some of the other sites had membership costs attached, and not all of the sites had guaranteed payouts. Some appeared to be outright scams.

Former members also say that in its early years, Survey Junkie used the tactics that many survey-taking Websites are infamous for, namely, the claim that members could make $20 per hour. While there is the chance of making $20 in one hour, there really is no way that any one person could consistently make $20 per hour. Ten to $12 per hour is a much more feasible rate to aim for.

Our own experience with SurveyJunkie.com was nothing like this, so we can only assume that SurveyJunkie.com went legit at some point and completely changed their marketing strategy. It appears that now that people are given a more realistic picture of what they can earn, membership is picking up. We were pleasantly surprised to see that SurveyJunkie.com does not make any wild claims about being able to quit your job and earn a living by sitting at home in front of your computer answering survey questions. In fact, on its FAQ page under the heading, “How much money will I make for taking surveys?”, Survey Junkie states: “You will NOT get rich by taking surveys.” They go on to say that you can, however, make some significant pocket money. We found their honesty to be very refreshing!

Part of our research for this Survey Junkie review involved creating our own account and seeing whether SurveyJunkie.com lives up to its hype. Within minutes, we had earned around 75 points. In less than 20 minutes we were able to earn 140 points. Even so, at that rate we would only earn about $4.20 per hour. However, it’s probably fair to admit that we weren’t trying very hard, and we’re also betting that, with time, a user would probably get a lot faster and more efficient at completing the surveys, so perhaps $10 per hour isn’t that unreasonable.

One of the most common complaints users have about survey-taking Websites is that the surveys took so much time to complete that they rewards were not worth the effort. Some users also complained that they would get partway through a survey only to then be told that they didn’t qualify for that particular survey and, therefore, were not rewarded for their time.

On SurveyJunkie.com, you’ll be told right up front how much time it will take to complete each survey. Of course, this is just an estimate. However, we completed a handful of surveys ourselves and we were able to complete them all in less than the estimated time, sometimes even half the time. Just remember, the times will vary depending on how fast a clicker you are and how you answer certain questions (some may require longer answers). However, the fact that Survey Junkie gives you this info up front makes us love them even more.

So, for our overall Survey Junkie review, here is what we think are the pros and cons of SurveyJunkie.com:

Although it’s clear that you can’t make a liveable income using SurveyJunkie.com, it does appear that many users are making appreciable pocket money. As long as your expectations aren’t unrealistic, we think you have nothing to lose by at least giving SurveyJunkie.com a try.

YELLOW BADGE
RECOMMENDED BUT WITH CAUTION
Guaranteed payout for every survey you take.
Can’t make a livable income on SurveyJunkie.com