Scentsy Review – Is Scentsy Some Type Of Scam Or Pyramid Scheme?

Earning money from home is a goal that most people have. There are numerous companies that promise that you can make money without going into an office. Scentsy is one of these companies.

However, before you become a Scentsy consultant, it is important to read our comprehensive Scentsy review. Here you will learn about earning potential and whether there is a Scentsy scam or Scentsy pyramid scheme. 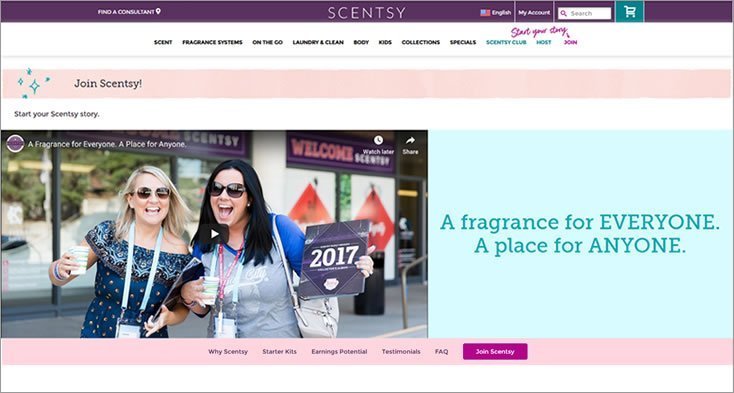 Scentsy is a multi-level marketing company that sells home fragrance items. People can sign up to become a Scentsy consultant so that they can sell the products to earn a portion of the profits. You can also recruit other consultants to earn money from their sales.

Kara Egan and Colette Gunnel, two sisters, started this company in 2003. They say that they started the company because fragrance can make people feel better and connect with others.

The sisters started selling their products at home shows and other local establishments and events In Idaho, Utah and surrounding areas. In 2004, they were at a home show in Utah when they met Orville Thompson. He believed that the sister’s wickless candle idea had merit and could turn into something big.

A few months after Orville met the sisters, he bought their little company from them. Along with his wife Heidi, Orville decided to take a multi-level marketing approach to the business. They signed on their first consultant in 2004 to start selling the products directly.

Throughout the world, there are over 90,000 independent consultants. The parts of the world that currently let people sign up as consultants include Mexico, Canada, Guam, the United States, Puerto Rico, France, Germany, Ireland, New Zealand, the United Kingdom, Austria, Australia and Spain. They have plans to expand to other countries in the future.

Most reviews on the products are favorable. People say that the scent is potent and accurately reflects the description on the website and marketing materials. Most believe that the scents have a good throw and are high in quality.

This company offers a variety of products for home fragrance and cleaning.

The categories that their products fall into include:

They offer a wide array of fragrance families, including:

This company started by making warmers for scented wax. You light the warmer and put the scented wax pieces into it. The wax melts and releases the scent.

How Does Scentsy Work?

Scentsy has a compensation structure that they follow. How much a consultant earns is associated with how many points that they have. There are different consultant levels. As someone gets to a higher level, they have the potential to earn more money.

To maintain your level, you have to consistency meet the point minimum. Consultants can be promoted or demoted based on the points that they earn during a month.

The consultant levels include:

You also earn based on the downline of people you recruit to sell the products. The commissions for this start at the Lead Consultant Level and range from two to nine percent, depending on your consultant level during the month.

There are minimum requirements to remain a consultant. During any consecutive four-month period, you have to sell enough product to earn at least 200 points during at least one month of that period.

How to Become a Scentsy Consultant?

To become a consultant, you have to sign up under an existing consultant. Once you pay the associated fees, you can start selling the products to earn a commission. At this time, you can also start earning from the people you sign up to be consultants once you get to the Lead Consultant level.

How Much Does Scentsy Cost?

The traditional Starter Kit is $99 plus shipping and local taxes. The shipping fee was $10 at the time of this Scentsy review.

The Starter Kit includes the following:

How Much Money Can Be Made with Scentsy?

Group one earnings break down in the following way:

Group two earnings break down in the following way:

What Other People Are Saying About Scentsy?

Getting information about what those who were once a Scentsy consultant is important to determine if there is a Scentsy scam or Scentsy pyramid scheme. It is also important to look at reviews from current consultants for balance.

There are reviews from those associated with Scentsy or its products from the following websites:

On this website, they have 1.5 stars at the time we compiled this Scentsy review. This is from 14 reviews. These are a mixture of consumers and consultants.

Several consumers say that the company refused to replace or refund defective products. They state that they tried to work with their consultant and the corporate office but did not receive a resolution to their problems.

The reviews from former consultants state that they received little to no help learning the business from the consultant that they signed up under. One reviewer says that they tried getting further help from the company on their Facebook page and they deleted their comments and ignored their private messages.

Most of the reviews are negative. Several are from consumers who only purchased the products and did not work as consultants. They discuss issues, such as having difficulty getting refunds or replacements for defective products.

One review says that the products had a scent that faded too quickly. They tried to get help from their consultant and felt that the customer service that they received was subpar because the consultant did not do anything to help them.

On this website, there are reviews stating that the products are inferior. Other reviews say that this company is a typical MLM scam. Several reviews focused on the lack of replacements or refunds for defective products.

On the review section on their Facebook page, the company has 4.5 stars. The reviews are a mixture of consultants and the people who purchased the products from them.

Those who simply bought the products seem mostly happy with their quality. The consultant reviews are also largely positive. However, most appear to also be trying to recruit people based on their review. In the comment sections of the reviews, there are many negative comments concerning earning potential.

At the time of this Scentsy review, the company had 4.3 stars on Indeed. This is from 424 reviews. Most of the reviews on this page were from consultants.

Most positive reviews were about the quality of the products. Some said that they had fun working as a consultant. Others believed that the company put a lot of focus on family.

The majority of the negative reviews center around earning potential. These reviewers often said that it was hard to sell enough of the product to earn a decent wage. Most of these reviewers stated that they still needed to work a regular job while using this company as extra cash on the side.

The company has 2.9 stars at the time of this Scentsy review on Glassdoor. This is from 204 reviews. All of the reviews are from consultants.

Some reviewers say that selling the products changed their life. They were able to work from home and earn money. However, none of these reviewers state the amount that they made and if it was enough to replace a full-time income.

Another negative issue many reviewers mentioned were the strict guidelines associated with selling the products via social media. These reviewers felt that it made it far too difficult to host parties via social media which inhibited their earning potential.

Whether the blog comments are positive or negative appear to depend on the tone of the blog that they are left on. For example, the blog posts that paint the company and being a consultant in a positive light tend to have mostly positive comments and vice versa.

Most of the positive comments say that the consultant makes a lot of money and encourages people to join under them. These appear to mostly be recruitment opportunities.

The negative comments are more varied. Several people talk about how the quality of the products appears to have diminished since the company began.

The comments from former consultants run the gamut from feeling as though they were preyed out to stating that they believe that they were scammed. Most are unhappy with the lack of help and support that they received from the company and the consultant who recruited them after they signed up. Other comments discuss the low earning potential from selling the products.

Due to the information in this Scentsy review, we recommend with caution. Those working as a Scentsy consultant can earn money, but most do not earn nearly enough to replace a part-time or full-time income. However, since it is possible to earn money as a Scentsy consultant, we can confidently say there is NO Scentsy scam or Scentsy pyramid scheme.