It Works Review – Can This Company Really Help You Change Your Life Physically And Financially?

Before diving in, reading a thorough It Works review allows you to gain the knowledge necessary to determine if this is the right opportunity for you. Learn whether there is an It Works scam or if it is a viable company. By the time you complete this It Works review, you will know if it is a company that you want to get involved with.

What is It Works?

As we start our It Works review, we will look at what It Works is. It Works is a direct sales multi-level marketing company. You start by signing up to be a distributor. From there you have the option to sign up new distributors under you.

You earn a commission based on the products that you sell. Distributors also earn when they sign up new distributors and they start selling It Works products.

History of It Works? 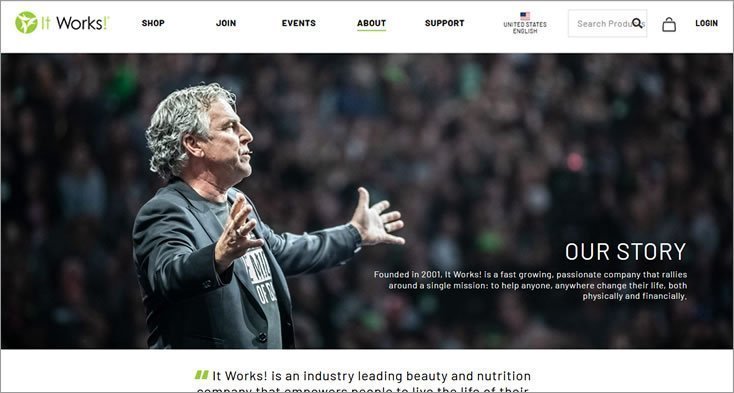 In this part of our It Works review we will explore the history of the company. This information will make it easier to determine if there is an It Works scam.

Cindy and Mike Pentecost started It Works in 2001. Before the company’s launch, Mike was a high school teacher and Cindy stayed at home to raise their children. In 1995, they got involved in a home-based business opportunity that focused on telecommunications. This gave them the idea for It Works.

The company’s headquarters is in Florida. As of 2019, they have offices in countries throughout the world, including Belgium, Sweden, Spain, Ireland, New Zealand, Denmark, Netherlands, France, Germany, the UK and Canada.

They started with a body wrap. Since that time, they have added a variety of other health and wellness items to their product list. It Works claims that they have reached more than $500 million in sales since they began.

Are It Works Products Good?

This part of our It Works review focuses on the products that the company’s distributors are tasked with selling. Their products fall into seven categories:

The body wrap that promises to shrink the part of the body that you apply it to was their first major product. The Truth in Advertising website says that It Works has many claims about their products that are not completely true.

It Works claims that some of their products can purify the body by removing toxins. However, there is no scientific evidence to support that this is even possible. They say that their wraps can help with loose skin and cellulite. However, no data exists to support these claims.

How Does It Works Work?

As we continue our It Works review, we will now explore how It Works actually works. This will help you to see if this is a good opportunity for you. Once you sign up to be a distributor, you sell the products and bring on new distributors under you.

The company states that there are several ways to earn a commission selling the products. You can do direct sales in person, share your link online or host parties where you describe the products and sell them to people at the party.

How Much Does It Works Cost?

A breakdown of the costs is an essential component of every It Works review. To become a distributor, you pay $99 for your Enrollment Kit. This comes with a few products that you can test yourself and use for demonstrations:

This kit also includes the It Works Toolkit, order forms, handouts, marketing materials and cards. When you sign up, you get 30 days of free access to your own eSuite and website. After 30 days, if you want to keep using these services, there is a monthly fee of $20.

How Much Money Can Be Made with It Works?

Whether distributors earn money is important for determining if there is an It Works scam. In this part of our It Works review we will explore earning potential.

There are four primary ranks that you can fall into when you sell It Works:

All four ranks earn a 10 percent commission for the first two legs of their downline. The commissions decrease to five percent, depending on your level, for legs three through five. It is at two percent for the sixth leg. Only Emerald has a sixth leg.

After Emerald, people who earn more can progress through more ranks:

It Works released an Income Disclosure Statement in 2016. The information is as follows:

What Other People Are Saying In Their It Works Review

Before you start selling It Works, you want to know if there is an It Works scam. This section of our It Works review focuses on the experiences of current and former distributors. There are reviews from the following websites:

It Works has three stars on this website at the time of this writing. This is from 101 reviews. The reviews seem to be from people who used the products and distributors.

Several negative comments on this website say that the customer service is very poor. They say that they had a very hard time canceling, resulting in them being charged for products that they did not order.

Some commenters say that in their country, it is nearly impossible to talk to customer service on the phone because no number is available to call. They did not state which country they lived in.

A few commenters say that the distributor that they purchased from ordered more than they were supposed to. This resulted in people having money withdrawn from their accounts that they did not authorize.

One person said that they had to cancel their credit card to get It Works to stop charging them for an autopay subscription they never signed up to get in the first place.

The Better Business Bureau has a banner on their It Works page that says that they have received a pattern of complaints about how this company makes it very difficult to cancel orders. This has resulted in people receiving products and being charged for things that they did not authorize.

It Works is not accredited by the Better Business Bureau. They have a C+ rating on this website at the time of this writing. Out of approximately 256 reviews, they have three stars. The complaints summary includes 454 complaints from the last three years:

Several complaints state that people were charged for the Loyal Customer program, but they did not authorize becoming part of this program. The distributor that they worked with signed them up for this program without their knowledge or permission.

Numerous complaints discuss how difficult it is to get a refund even when someone follows the refund policy exactly. Some people state that just putting something into their virtual shopping cart resulted in them being charged for the product even though they did not complete the checkout process.

On Facebook, It Works has almost 41,000 likes on their official page at the time of this writing. They do not have a review section for people to leave feedback on their company.

There is a community section. Most of the comments here are people dropping their links to try and sell products. All of these posts praise the company and products because they appear to be trying to make some sales or sign up other distributors.

The official Facebook page mostly consists of the company promoting their latest products. The comments on these posts vary. Most are people dropping their It Works link to try and make sales. Some comments say that the products did not work for them.

It Works has 4.2 stars on Indeed.com at the time of this writing. These are a mixture of distributor and corporate employee reviews.

Some reviewers do not like the commission-based earning’s structure, but they say that the company does pay what distributors are owed. Some reviewers state that earning money can be slow and difficult.

One reviewer says that the company is manipulative. While she enjoys being able to work from home, she feels that the distributor who signed her up was dishonest and not wanting to help her to succeed. This reviewer states that she felt like the distributor used her to get a commission for signing her up.

This company has 3.2 stars on Glassdoor at the time of this writing. These reviews seem to be mostly from distributors, but a few are from employees of the corporate office.

Some reviewers say that selling the products is easy. They also like that you can do all of the sales from home and you never need to go into an office.

The negative reviews are largely based on earning potential. These reviewers say that the distributor that signed them up was not fully honest about how hard it can be to earn money from selling the products.

The blog comments are a mixture of complaints and people leaving their link to try and convince others to become a distributor or buy their products. Overall, the comments left on blogs that actually discuss the company, the products and being a distributor are mostly negative.

A few comments state that they believe that It Works is a scam. These comments are mostly by people who purchased products and not distributors.

The comments from distributors seem to be mixed. Current distributors say that it is a great opportunity while former distributors mostly tell people to not bother trying to sell the products.

Our It Works Review Verdict

This concludes our It Works review. You have learned most of the important information you need to know about this company.

Our verdict is that we recommend It Works with caution. We can confidently say there is NO It Works scam.

However, most people are not earning a full-time income as a distributor. There also appears to be a lot of dissatisfaction with product quality and the company’s customer service.