Herbalife Review – Is Herbalife A Pyramid Scheme And Scam?

If you are considering becoming an Herbalife distributor, it is important to first read this Herbalife review. It covers the details and discusses whether there is an Herbalife scam or Herbalife pyramid scheme.

Learn whether Herbalife can produce profits or if it just falls flat with this Herbalife review. We have done thorough research to see what this company is really about.

When you read any Herbalife review, it is imperative to get general information about the company. It is important to learn the facts regarding the company’s distributors and their products. Before someone decides to sell Herbalife or become an Herbalife distributor, they should thoroughly vet all aspects of this company.

The products include various dietary supplements and meal replacement shakes. People who use the products are supposed to combine them with a healthy diet to see results. Most of the literature also promotes regular exercise.

This means that in addition to buying the products, consumers must also purchase various foods to eat with them. There are different diets that people can use with Herbalife, including:

It is possible to lose weight, but the long-term effectiveness of the products and diets has not been proven or studied. Some of the products also contain ingredients that may cause negative health effects.

Before someone decides to become an Herbalife distributor and sell Herbalife, it is important that they understand the basics regarding this position.

Distributors can sign on to sell the products via another distributor. Once someone becomes a distributor, they can earn money by selling Herbalife products through direct selling or signing on new distributors under them.

This company works via multi-level marketing. When someone signs up, they are level one. As they sign up people under them, they create more levels.

Ultimately, distributors can use this program in three ways: 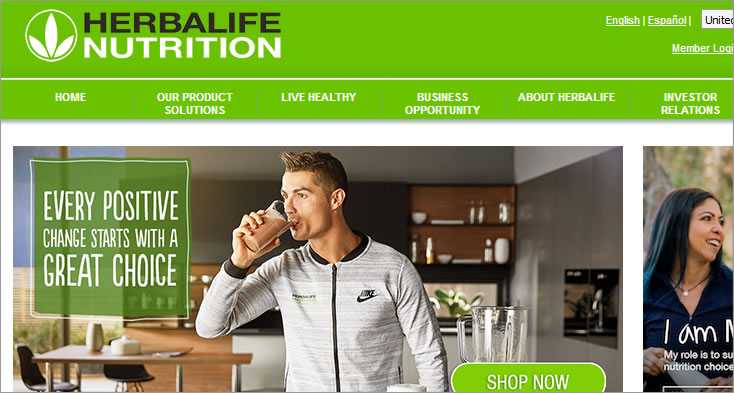 It is important to read about the history when you are exploring an Herbalife review. This gives you some insight into the company as a whole, as well as whether there is an Herbalife scam or Herbalife pyramid scheme.

In February of 1980, the company got its start under Mark Hughes. At this time, he was selling the nutritional products from the trunk of his car. He said that he was inspired to create weight loss products due to his mom struggling with her weight and eating disorders throughout her life.

A protein shake was the first product that he created. It was made to purportedly aid people in managing their weight. From here, he restructured his business model to one that used both multi-level marketing and direct selling.

In 1982, Hughes was forced to reevaluate his products due to Food and Drug Administration complaints about them. Further changes were made in 1984 after criminal charges were filed by the Department of Justice in Canada. These were due to the company using advertisements with misleading medical claims.

In 1985, the company had to reevaluate other products since the California Attorney General sued them. This was due to them making false and exaggerated claims regarding product efficacy.

Over the years, the company continued to expand the products that it offers. It also brought on more independent distributors to sell the products to consumers.

The company is now in around 94 countries throughout the world. The business model continues to utilize both multi-level marketing and direct sales.

The FTC got involved with the company in 2014 and launched an investigation. Herbalife agreed to pay out $200 million to distributors and change their business model because of this investigation. This was in 2016.

How Does Herbalife Work? 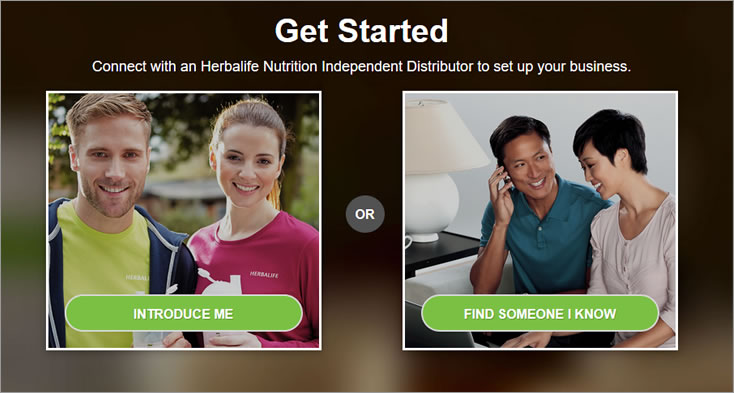 It is important to delve into how this company operates when reading an Herbalife review. The company uses a direct selling approach. This means that individuals sell the product to consumers.

Distributors pay a fee to become a distributor. They gain access to products by either buying items themselves at a discount and selling to earn a profit, or via dropshipping. With dropshipping, the distributor can order the products for a buyer and have them sent directly to the buyer.

Distributors are encouraged to sign up other distributors. This allows them to create a downline. They purportedly earn money based on those they sign up to be a distributor.

How Much Does Herbalife Cost?

This part of this Herbalife review digs deep into the costs associated with Herbalife. This is also where people can gain deeper insight into any possible Herbalife scam or Herbalife pyramid scheme.

It is claimed that the starting cost to become a distributor is $59. However, when reading various reviews, there were multiple price points that were discussed. Some people who left reviews for the company cited that the costs can be as high as several thousand dollars to get started.

The Herbalife website makes it almost impossible to find pricing information. They do not offer straightforward information regarding the costs associated with becoming a distributor.

As people get to new levels, if they want to maintain them, there are certain minimum purchase requirements. For example, those who become a supervisor, need to buy at least $2,500 in Herbalife products each month in order to maintain this level.

They do not discuss the minimum purchase requirements on their website. This information needs to be obtained from third-party sources, such as review websites.

While the purchase requirements remain in place, if a distributor cannot sell all of the products, the company does not offer to buy them back.

Distributors may incur other costs while they are working to sell the products. The company appears to recommend that people advertise their business in the form of fliers, business cards and similar materials.

The company does not provide these marketing materials to their distributors, so those selling Herbalife are expected to pay for them out of their own pocket.

Those who want to attend events, such as trade shows or conventions, are expected to pay for all of the associated costs.

How Much Money Can be Made with Herbalife? 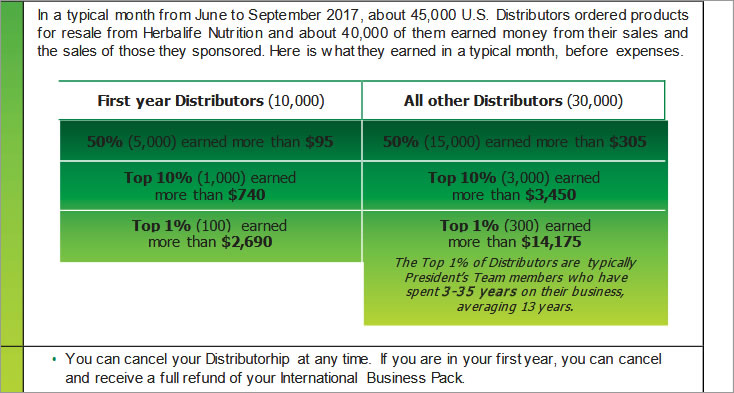 Any good Herbalife review will provide details regarding potential earnings. This information also allows consumers to determine if there is an Herbalife scam or Herbalife pyramid scheme issue.

Herbalife cites that from June 2017 to September 2017, that nearly 45,000 US distributors ordered products so they could resale them. They go on to say that about 40,000 US distributors actually earned money from their sales or sales of those they may have sponsored.

The following is the average earnings for these distributors in a typical month before expenses:

Out of the 40,000 US distributors that earned money 10,000 were first year distributors and their earnings breakdown like this:

Out of the 40,000 US distributors that earned money 30,000 are what is considered “all other distributors” and their earnings breakdown like this:

Don’t let these numbers fool you. It is estimated that among all distributors selling Herbalife products or recruiting new distributors in the United States, that approximately 86 percent of them DO NOT receive any earnings.

When someone is distributing Herbalife products, they make a percentage of each sale as a commission. Depending on where people look, the percentage of commission that people earn changes.

For example, some sources say that people purchase Herbalife products at a 25 percent discount. Then, they sell these products at the full retail price. So, say a products costs $100. If they buy it at 25 percent off of retail and sell at full price, they earn $25.

Distributors who sign up new distributors also earn money this way. However, the Herbalife website does not provide clear information about how much money this might earn someone. They only state that the more people someone signs up, the greater their earning potential will be with this company.

What Other People Are Saying in Their Herbalife Review

To better determine if there is an Herbalife scam, you want to explore the different Herbalife review sites on the internet. These reviews focus on the probability of a possible Herbalife pyramid scheme, and on the actual products themselves.

Herbalife Reviews can be found on the following websites:

SiteJabber makes a mention of Herbalife having to pay out millions to distributors due to dishonest earnings claims.

The other reviews on this website discuss the actual products that the company sells. The majority of reviews were only one star. Users of the products largely stated that they were not effective in promoting weight loss.

Herbalife has three stars on TrustPilot. The reviews are a mixture of consumers who purchased the products and distributors who solid it.

Some distributors remarked that there is a possible Herbalife pyramid scheme. They say that this company brainwashes distributors regarding product efficacy and earning potential.

Herbalife is not accredited by the Better Business Bureau. However, the company has multiple profiles on the website for the various locations throughout the country. The ratings vary based on location.

There are more than 200 reports on RipOffReport regarding Herbalife. Those who made reports cited predatory sales tactics by distributors trying to get new people to sell under them.

Many people reported that Herbalife kept charging their credit or debit card even after they cancelled the service. One review said that the company brought her to the brink of bankruptcy due to the costs that kept piling up.

Herbalife has a Facebook page, but unlike most companies, they do not have a review section. They also do not allow people to make their own posts on the page.

There are dozens of pages for Herbalife on Indeed.com. These pages include individual pages for single distributors and pages for people who are employed by the company.

The actual employees have given the company 4.2 stars. The other pages vary greatly regarding the assigned stars.

Glassdoor has multiple pages for Herbalife. The pages that receive reviews from actual employees of the company average 4.8 stars. The pages regarding distributors vary greatly.

Most of the complaints are in regard to the Herbalife products or that the business opportunity did not work for them.

Of course they’re are some positive Herbalife reviews. Some say the product works great, they lost weight, feel better, and that the business is solid, but these are overshadowed by the negative reviews.

Is There an Herbalife Scam?

There does not appear to be a specific Herbalife scam. However, in 2017, the Federal Trade Commission ruled against the company. This resulted in approximately 350,000 people receiving compensation from Herbalife.

The compensation was due to people losing money while being an Herbalife distributor. This money was not given because of a possible Herbalife pyramid scheme, but because the FTC said that the company was dishonest regarding earning’s claims.

The total payout to distributors was $200 million. The company was also told that they must restructure their business.

Our Verdict on Herbalife

This is the end of this Herbalife review. Is Herbalife a scam? Is there an Herbalife pyramid scheme?

In the strictest sense, this company is not a scam or a pyramid scheme. It is a multi-level marketing company. However, are the claims made backed up by facts? Do the actual products have a legitimate scientific backing? We’re not entirely sure.

It is possible to earn money as a distributor. However, like most MLM companies, the earnings tend to be low for most distributors.

Is this because Herbalife  doesn’t work? No, Herbalife can work for those that want to work hard. MLM is not easy but if you commit yourself, you can make money. Most people do not really put for the effort to make money in Herbalife  or any MLM business so just because averages are low doesn’t really mean much.