This Coinbase review will cover everything you need to know about the Coinbase platform. Should you have further questions about Bitcoin and cryptocurrency, please contact us.

Coinbase is a Web-based platform for buying, selling and storing Bitcoin, Litecoin and Ethereum, all of which are cryptocurrencies. (Later on in our Coinbase review we’ll talk more about what cryptocurrency is.) It also offers a variety of merchant services.

Armstrong and Ehrsam started the company in 2011. Back then, the company dealt only in Bitcoin (which was just starting to take off). Buying and selling could only occur via bank transfers.

Over the subsequent years, the company began providing expanded services. In 2016, they added Ethereum, and then Litecoin a year later.

They also added merchant services in the form of API for developers and merchants, plus point-of-sale options to give them the ability to accept payments for their services in digital currencies. The Coinbase app became the number one app in the Apple store in early December of 2017. 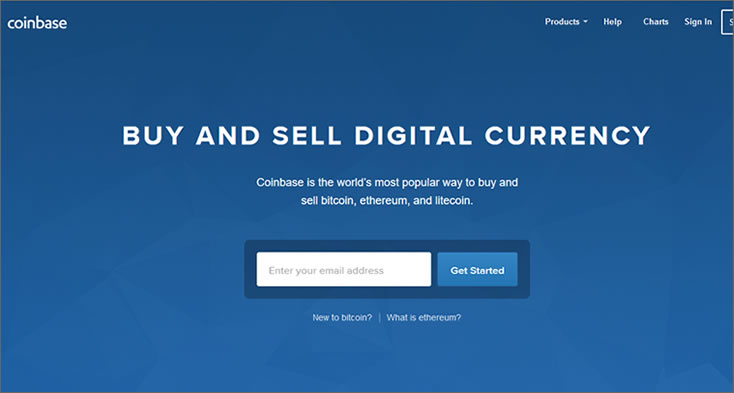 Coinbase has tagged itself as “the one-stop-shop” for Bitcoin, Ethereum and Litecoin thanks to the site’s multiple capabilities and applications. It is a Global Digital Asset Exchange, a digital wallet, plus it offers an array of merchant/business services/applications.

As we mentioned previously, Coinbase started out as a Bitcoin retailer. Some consumers mistakenly believe that Bitcoin (abbreviated BTC) was the first cryptocurrency.

One of the earliest cryptocurrencies was Digicash, developed during the 1980s. Although it eventually failed, it paved the way for the future development of new cryptocurrencies.

While Bitcoin may not have been first, it was the first one to make cryptocurrency popular and widely-accepted and known in the general public. Today there are a number of cryptocurrencies on the market. None have taken off quite like BTC.

Its popularity lies in the fact that it can be traded anonymously. There is no “central bank” or other governing body overseeing, controlling or manipulating BTCs trade or value.

In this Coinbase review, we will describe how the service works for both individual and business customers.

For individual consumers, it is a platform for both buying and selling Bitcoin, Ethereum and Litecoin. It is also a digital wallet provider. A digital wallet is essential for storing any cryptocurrency.

A digital wallet is basically a highly encrypted file that protects your currency from being stolen. In fact, it has several layers of protection to ensure the security of currency inside.

However, it doesn’t just store currency. A digital wallet can also store personal information and acts as a point of sale payment system anywhere that cryptocurrencies are accepted.

What does the Coinbase wallet do?

Not all digital wallets are the same. The Coinbase wallet, as well as the Website itself, is arguably the most popular with consumers and cryptocurrency traders. It has won a number of different awards over its years in business.

Here is an overview of the features and capabilities of this wallet:

Coinbase complies with many of the same banking regulations that apply to traditional banks. This includes AML (Anti Money Laundering) and KYC (Know Your Customer) program participation, which traditional banks adhere to.

Coinbase has an API which outside developers can use to create custom integrations for their businesses. Merchants have a few different options for integrating the ability to accept BTC as payment, both online and in-store. This includes payment buttons, hosted checkout Web pages or i-frame for merchant Websites, shopping cart plugins for popular Website platforms and the ability to send email invoices.

COINBASE REVIEW BY OTHER USERS: WHAT OTHERS ARE SAYING ABOUT COINBASE

For our Coinbase review, we checked out what other users across the Web have been saying about their own experiences with the company. Unfortunately, there are far more negative reviews than positive ones.

On TrustPilot.com, a consumer review Website, Coinbase had an overall rating of one star out of a possible five, a very poor showing. Approximately 80 percent of review providers rated the site one out of five stars. Less than ten percent ranked it five out of five stars.

One Coinbase review provider who rated the site with one out of five stars said, “Their support is terrible. They ignore all forms of contact.” Another user who gave a one-star rating stated, “Terrible customer service – no reply after a week.”

Another user who provided a one-star rating in his Coinbase review submitted a service ticket and didn’t receive a timely response. He submitted another one regarding a different issue and said this: “Terrible, no money received for over a week now. Zero response from customer service with both of my tickets.”

Still another complained that even if they do reply to your ticket, the response is unhelpful. “Many times, they will email you back a response that takes you to their useless loop of automated ‘solutions,’” he stated. He also gave the service just one star.

However, there were a small number of five-star reviews. These users seemed pleased with their experiences. Said one: “It is easy to [get frustrated] with Coinbase because they want to validate a lot of information to prevent people from cheating, and that is good for all of us!”

Another one stated: “My experience of buying and selling using the wallets and my debit card has been a positive experience to date. I have not had any cause to contact customer service either so I’m unable to comment on this service. I am honestly sorry to hear that others have had problems and I can only hope that I do not face any of the issues experienced by some and hope they get matters sorted quickly.”

The second most commonly occuring Coinbase review complaints we discovered were related to slow transaction processing times. This seemed to apply more to large transactions (one thousand dollars worth or more) than smaller ones.

One user (who provided a one-star rating) had this to say: “They keep bank transfers many days and do not put them in your account!” Another one-star reviewer complained, “40 confirmations for Ethereum, still says transaction ‘pending.’ So slow.”

A small percentage of the Coinbase review complaints in the were in regard to the fees that are charged for buying and selling. However, in comparing its fees to those of other wallet and trading platforms, we found the differences in fees to be negligible and not a significant deterrent to using their services.

One last thing to draw your attention to: a significant number of the Coinbase review complaints we read came from users outside of the US. Complaints from UK users were especially troublesome, particularly in regard to transaction processing speed, making withdrawals and executing international transfers. It is possible, then, that US users may not be experiencing such problems to the same degree as users in other countries.

Additionally, Coinbase doesn’t have nearly the same level of dissatisfaction when it comes to its merchant/business services. Merchants seem to appreciate the ease of use of the software needed for accepting cryptocurrency payment. Many also report that the API for custom integrations is user-friendly.

OUR VERDICT ON COINBASE

Although you can purchase and sell Ethereum, Litecoin and Bitcoin on this platform, BTC is its more popular currency as of late. So you’ll notice that we make more references to it than the other two in this Coinbase review summary.

However, many of the same issues that we describe applies to all three currencies. For now, we’ll talk a bit about Bitcoin specifically.

One of the things that makes BTC so attractive to investors and consumers is that it was designed to work “outside the system,” so to speak. It’s the “rebel” of currency, unmonitored by traditional banking and uncontrolled and unmanipulated by any government. Trading can (potentially) occur with relative anonymity.

On the other hand, a majority of the people who trade in Bitcoin today aren’t really all that worried about anonymity. While its earliest adopters may have jumped on board with it for its obscurity from government and Big Bank entities, most of today’s traders simply trade it because it’s popular and because it has gained so much value in recent months.

For better or for worse, it’s been called a “bandwagon” currency. By this, we mean that it is attracting a lot of interest and attention by people who have never purchased cryptocurrency before and just want to be a part of the wave ( a fad, if you will).

We feel we can’t ignore the fact that there are so many negative reviews on the Web about Coinbase. On the other hand we also believe it’s fair to temper this against the fact that a significant number of the negative Coinbase review posts we read came from UK and other international users. Their experiences may not accurately reflect the experiences of US users.

Additionally, Coinbase has characteristics of both a cryptocurrency exchange platform and a bank. Because of this, consumers who don’t like the traditional banking system may not appreciate the constraints of Coinbase.

On the flip side, this fact might actually appeal to consumers who don’t care about anonymity and appreciate the benefits of traditional banking. So, depending on which side of the fence you sit, you may either love or loathe Coinbase.

We really want to try to strike a balance between the interests of these two very different types of consumers.

To summarize our thoughts:

Coinbase is a great option for:

Coinbase may not be the foremost option for:

We don’t want to say “avoid Coinbase,” nor do we want to say “it’s the best option for everyone.” In the end, Coinbase seems to suit a particular type of user, and if you fall outside of those parameters, you might not be happy with its services.

So, instead, we will cautiously recommend it for the types of users described previously. Even then, start out with small purchases, make only small transfers and keep your expectations in check when making withdrawals. It won’t happen instantly.

YELLOW BADGE
RECOMMENDED BUT WITH CAUTION