Ariix Review – Our In-Depth Look At The Ariix Program

Using Ariix for income is something you might be considering. However, before you join the program you will want to explore our comprehensive Ariix review before committing to the company. Analyzing Ariix reviews will help you to gather all of the pertinent information so that you can determine if this company is legitimate or if there is an Ariix scam. 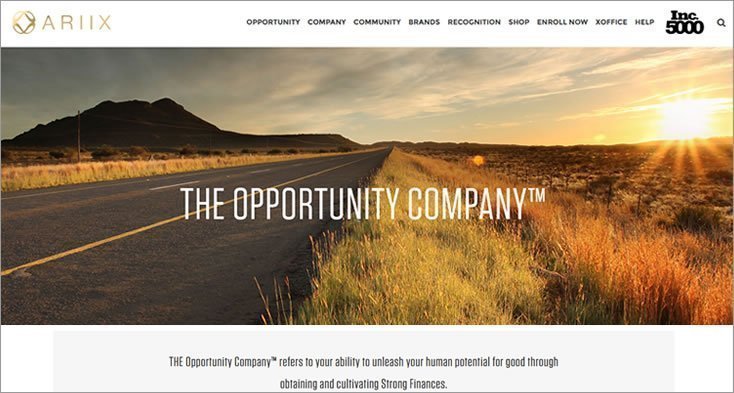 Ariix is a company that recruits people to sell their products. Once you become a representative, you have access to a variety of independent brands.

The company views their representatives as a partnership. They say that all representatives get certain opportunities and legal rights to create a business that is 100 yours.

In this first part of our Ariix review we will look at the background information on the company. This company started in 2011. The CEO of this company used to be the COO and president of Usana, a different health and wellness multi-level marketing company. Fred Cooper joined Jeffrey Yates and Mark Wilson to create Ariix.

Ariix states that it was created using the visions of six different people. All six of these people had backgrounds in nutritional science or business. Their goal was to create products that would become the “gold standard” in the multi-level marketing field.

Ariix claims that all of their products are driven by science. There are five primary product types offered by this company, including:

This company also offers products from the following categories:

There are no double-blind placebo-controlled studies for any of their products. Because of this, it is impossible to prove efficacy. Those interested in the products should read the ingredient labels and talk to their doctor to ensure safety with using any type of natural supplement.

According to customer reviews, some people love the products and others find them to be a waste of money. Some reviews say that people experienced negative side effects when using some of the Ariix supplements.

How Does Ariix Work?

This company lets you earn money in several ways. The first is by earning commission selling the different products. This is considered direct selling. You can choose which products you want to sell when you purchase your Enrollment Package.

As you recruit new representatives, you earn a commission based on what they sell too. All levels of your downline earn you the same amount of commission.

To remain an active Ariix representative, you have to pay the annual fee and sell a minimum amount of products every four weeks. If you are not maintaining the selling minimum, you will not be eligible to keep earning commissions from what you and your downline are selling. The minimum is 75 PV every four weeks.

How Much Does Ariix Cost?

There are four levels of Enrollment Packages:

All of the figures here are for aspiring representatives in the United States. Costs may vary in other countries.

How Much Money Can Be Made with Ariix?

As we move to the next part of our Ariix review, we look at important information about how much the average representative earns. You can use this knowledge to determine if there is an Ariix scam.

The following earnings report is from 2016. It shows the annual average for the different levels of part-time and full-time representatives.

The following figures are for part-time representatives:

The following figures are for full-time representatives:

According to the compensation plan, Ariix gives their representatives $0.50 for every dollar earned. They state that this is the highest paying commission structure in the multi-level marketing industry.

The compensation plan says that it gives 15 percent commissions for the sales made by a person’s downline. This commission amount is the same for all downlines that a representative has.

The compensation plan takes into account that the cost of living in different areas increases. They say that their commissions increase according to increases in cost of living.

What Other People Are Saying Their Ariix Review

This is an important part of our Ariix review. Here we will provide information about what former and current people involved with the company are saying. These personal Ariix reviews will let you know if there is an Ariix scam or if the company is solid.

The Ariix reviews included here come from the following websites:

This company has a TrustPilot page on the UK TrustPilot website. They have one review and three stars at the time we compiled this Ariix review.

The single review is by a customer who only purchased the products. This person says that the quality is just okay, and that the items are too expensive for what they do.

They state that the Ariix auto-delivery system is very problematic. This person also states that the website often has issues with its functionality. She had to put forth a lot of effort to contact customer service because her emails were never responded to.

This person says that she tried cancelling her auto-delivery but Ariix just kept charging her and sending her products that she no longer wanted to use.

Ariix has been accredited by the Better Business Bureau since September of 2015. They have an A+ rating. Out of three customer reviews, they have two stars at the time we wrote this Ariix review.

One commenter says that he has been a member since day one. He says he will not use other products because Ariix items are excellent.

The other two reviews are only one star. One appears to be from someone who only bought and used the products, and not a representative. He says that Ariix will charge your credit card without your permission or giving you any notice.

Ariix does not have a review section on their Facebook page. Their community section on Facebook has more than 20,000 likes and follows.

On the Ariix community page, they show different events that they hosted. These include photos of representatives. The comments are from people who say they hope to sell enough to be a part of these outings in the future.

The comments on the different elements of their Facebook page are a mixed bag overall. There are many comments from people who are representatives trying to recruit new representatives. Many of these comments appear to be copy/paste marketing messages that the company likely supplies.

Other comments are not as positive. Several state that they believe that they were misled by the person who recruited them. These people say that they are not earning the money that they thought that they would.

Ariix has 4.2 stars on Indeed.com at the time of this writing. This is from 101 reviews. They are a mixture of distributors and people working for the corporate leg of the company.

The people working for the corporate office appear mostly happy with Ariix. They say that they are treated fairly, and their work environment is pleasant.

The reviews from distributors are mixed. Some of them remark that they opportunity is a good one. They say that they have earned money.

One person said that Ariix is like a pyramid scheme. This person did not like that they felt forced to recruit their family and friends.

Ariix has four stars on this website at the time we compiled this Ariix review. This is from 22 reviews. Most of these reviews are from people working for the corporate office.

One reviewer said that they liked the products. They state that the person who recruited them spent a lot of time teaching them how to operate their business. However, this person said that the marketing tactics could use some improvement.

Another reviewer said that they were not treated well. They were recruited and basically left to their own devices to figure things out.

There are numerous Ariix reviews on blogs. These provide some insight into what representatives experienced when they were selling the products.

One former representative said that the products were far too expensive for their quality. She feels that you can find the same products for considerably less at any drugstore. She says that it was hard to sell the products because the company does not release enough credible research to prove that they are safe and effective.

Several former representatives said that It cost too much to become a representative and remain active. They were not earning enough selling the products and recruiting others to make the opportunity worth it for them.

There were some positive comments on blogs. Some people stated that they earned a full-time income selling the products. However, they offered no proof and did not discuss actual numbers.

Several blog comments were from customers. These comments focused on how they kept getting charged for auto-delivery even though they never authorized this. Many people stated that trying to contact customer service to fix this issue is very difficult. Several people said that they had to cancel their credit or debit card to get the charges to stop.

Many people are not making a livable income from this company, but they do appear to pay what people are owed. Because of this, our verdict is recommend with caution.

By exploring the company and scouring many of the Ariix reviews posted by others, we firmly say there is absolutely no Ariix scam. Just be sure to have realistic expectations when signing up with this company as a representative.